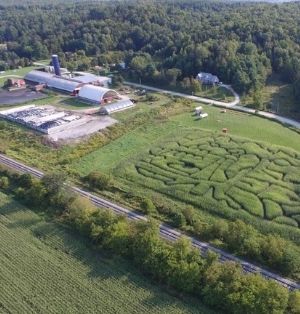 The North Williston Cattle Company in Williston, VT has been a member of the Champlain Valley Farmer Coalition since the organization’s founding in 2012. Lorenzo Whitcomb has served on the Board of Directors since 2013.

Like many farms in Vermont, Lorenzo Whitcomb’s North Williston Cattle Company is a family affair. He farms in partnership with his brother Onan and his nephew Ben. His sister-in-law Mary cares for and feeds the calves on a full-time basis. She also regales the farm’s Facebook followers with insightful and humorous stories of holstein hijinks. Since no farm operation could be successful without some degree of paperwork and behind-the-scenes management, Lorenzo’s wife, also named Mary, shares in the office duties and moonlights as a pumpkin farmer on a six-acre plot. His sons, who have careers off the farm, operate a challenging corn maze on site. For his part, Lorenzo oversees the crops, equipment maintenance, and the office.

Together, they are a team responsible for milking 240 holsteins, raising 260 young stock, and stewarding 800 acres of land along the Winooski River, which flows into Lake Champlain. They have been at it for a very long time, too. The farm dates back to the post-Civil War era when Lorenzo and Onan’s great-great-grandfather purchased 4-5 farms in Essex Junction. It was only 25 years ago that the family purchased the property in Williston.

At the time of our virtual visit with Lorenzo in December 2020, he was in a moment of transition, having just started a part-time gig as a groomer at a local ski resort. (When does he have time to sleep? “We’re working on that,” he quips.) Still, work on the farm hums along steadily. Just that week, they had emptied their manure pit and hauled the sand out from the bottom, the manure-sand concoction to be used as a rich topsoil elsewhere. (Sand winds up in their manure pit because that’s what they use to bed their cows.)

Improving water quality and supporting soil health have been features for much of Lorenzo’s farming life. It all started 35 years ago, when his family began to fence the livestock out of nearby streams and instead supplied water to their pastures for cows to drink.

About the same time, they began working with the University of Vermont Extension on soil sampling in order to develop the right mix of nutrients to fertilize each field with. When farmers know what mineral nutrients are needed on any given field, they can apply fertilizer in a way that is both environmentally and economically sustainable. This is a critical component of nutrient management.

Around 15 years ago, the Whitcomb family started installing riparian buffers along their fields adjacent to the Winooski River which is notorious for flooding its banks. Riparian buffers are strips of vegetation between a field and a body of water that prevent soil erosion and nutrient runoff.

In more recent years, Lorenzo and his family have started using manure injection, a process of applying fertilizer just below the surface that reduces nitrogen and phosphorus run-off. With a grant from the Vermont Housing & Conservation Board, they were able to purchase a no-till drill which they use to plant cover crops, soybeans, and new hay seedings. Cover crops help fields to hang onto their soil and nutrients during Vermont’s harsh winters and rainy springs.

In the near future, Lorenzo and his family hope to implement a dragline system for spreading manure. They currently haul manure by truck on Williston’s bustling roads, which is nearly impossible during peak traffic hours. Draglining will not only make their transport of manure more efficient, but also eliminate soil compaction caused by heavy manure trucks driving on the fields.

Lorenzo and his family have a proud history and bright future of protecting water quality and soil health, but he admits that the journey has not been easy. They have encountered several obstacles along the way: obtaining state-of-the-art equipment that functions properly; purchasing cover crop seeds with the adequate rates of germination; and finding more of the precious resource that always seems to be in short supply–time.

On that front, Lorenzo credits his brother Onan and nephew Ben with the farm’s environmental successes. By working as a cohesive team, they are able to ensure that everything that needs to get done in the course of a typical farming day gets done while allowing for the extra time required to accomplish special projects.

Lorenzo also credits his membership in the Champlain Valley Farmer Coalition. When he and his family were thinking of adopting manure injection and no-till planting methods, they were hesitant at first. They needed someone to talk to share advice, rather than relying strictly on their own trial and error, but they were not sure where to turn.

Through the Coalition, they were able to befriend other farmers who had experience with these practices. Those farmers shared the wisdom and knowledge that comes from both success and the gifts of failure.

Now that Lorenzo has many more years of experience under his belt, he is able to pay it forward to newer members of the coalition. His biggest pieces of advice? “Start with one practice that will help save you money. Get into a program that will pay you. Then you need to find the time to make it happen.”

When asked why it’s important to him as a farmer to be a good steward of the environment, Lorenzo told us about his three sons. One son is a landscape architect who designs systems for handling surface water run-off; another son manages the grounds for a large outdoor space; and his third son works in wastewater treatment. If the landscape architect does not do his job well, the grounds manager will find it challenging to properly handle surface water; if the grounds manager does not do his job well, the wastewater treatment specialist will have to pick up the slack.

For Lorenzo, this perfectly encapsulates how we’re all connected through water.

Indeed, we are all downstream.