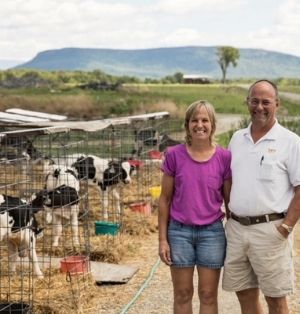 Rob & Suzy Hunt own and operate Bonaspecta Holsteins in Addison, Vermont. A Medium Farm Operation (MFO) dairy, they also raise beef cows and pigs that they market directly and through Green Pasture Meats. Anyone who has ever been to their farm or talked with Rob knows that they take a very pragmatic approach to farming.

Starting with 20 cows in New Haven Mills in 1985, relocating to Weybridge two years later and finally landing at their permanent location on Jersey Street in Addison in 1989, they steadily grew their herd to the almost 300 cows they milk today. One thing that sets Rob & Suzy apart from many of their conventional MFO counterparts is that during the summer, they rotationally graze their milking herd through pastures surrounding the farm. If you ask Rob why they graze, he’ll tell you that when they started grazing about 100 cows in 1992 they really didn’t have any harvest equipment and custom harvest businesses where few and far between back then. It just ‘made sense’ to let the cows do the work. After a couple of decades of grazing, they have fine‐tuned their system to make it the most efficient system possible. Rob has figured out the best ratio of water tubs to cows, getting water to every paddock, how big to size his paddocks, and how to make grazing work for his herd.

In addition to grazing, the meat animals also ‘just make sense’ for Rob and Suzy’s operation. Pigs utilize a lot of ‘other stuff’ on the farm that would otherwise go to waste. They also match nicely with the existing labor, workload, and equipment. He can mix a batch of pig feed with the same feed wagon he uses to feed the dairy cows and is more efficient along the way. Similarly, the beef cows fill a niche as he can utilize his lower producing cows to breed to beef breeds and uses cows that might otherwise be culled by grazing 2‐3 beef calves and using them as nurse cows.

Rob & Suzy are partcipating in UVM Extension research and demonstration projects, hosting gypsum, cover crop and short season corn trials. They also will help assess the utilization of no‐till planting compared to conventional tillage this spring. As Rob says, “someone’s gotta do it” or how will we figure out if and how it can work here in the challenging soils of the Champlain Valley. Rob values seeing how many of the practices CVFC promotes work on real farms and points out that he was skeptical of cover cropping. However, when he went to another CVFC farm for a field day to look at cover crops, he knew that farm wouldn’t be trying it if it wasn’t worth doing. After seeing it for himself, he was willing to try it on his own farm and let other farmers learn something along the way.

Rob values the role CVFC plays in connecting farmers and enabling them to share information between each other. He sees the importance of the outreach to the public, so they can see that farmers are not the enemy but doing their part to help the Lake and also just have a better understanding of farming in general. He also appreciates the directors who act as spokespeople for the members and, as Rob says, “deliver the message more smoothly” than he would be apt to.