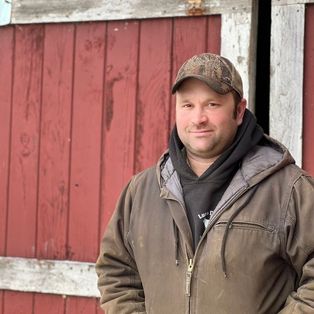 Jon Lucas is the owner and operator of Lucas Dairy in Orwell, Vermont. He has been a member of the Champlain Valley Farmer Coalition since 2012. In 2018, he was named “Conservation Farmer of the Year” by the Otter Creek Natural Resources Conservation District. American Agriculture Magazine featured Jon in 2020 for his work with cover crops and no-till corn planting.

Jon Lucas is a rare breed among farmers.

If you read our Featured Farmer stories on a regular basis, you know that many of our members come from long lines of agriculturally inclined folks.

Not so for Jon: He’s a first generation dairyman and Vermonter.

Having grown up in New Hampshire, Jon attended Vermont Technical College for Dairy Farm Management. He returned to his home state to work on two farms.

“Then I got the bright idea that I should farm on my own,” he says through a chuckle.

He moved to Starksboro, Vermont where he worked on David Russell’s farm for several years. Eventually, in 2012, Jon founded Lucas Dairy, purchased David’s herd, and rented his farm.

In 2016, he moved to his current location in Orwell, which he rents with the option to buy from fellow Champlain Valley Farmer Coalition members Tom and Mike Audet. The farm, part of the East Creek Watershed, is bordered entirely by the creek on the east. Just across the street sits Lake Champlain.

For the time being, Lucas Dairy, with its 300 cows and 890 acres, is entirely owned and operated by Jon, with the assistance of six full-time employees. He hires custom operators to handle manure spreading and chopping, while seeding and tillage is done in-house. Jon sells his milk to the Agrimark Co-op to make Cabot cheese.

When we visited Jon in mid-December 2022, the landscape was newly frozen and covered with a fresh coat of snow, with a significant storm looming on the horizon.

“We’re in full-on winter mode, trying to get everything buttoned up,” explains Jon.

This included putting the finishing touches on a project at the heifer barn to reconfigure the old drainage system and bring it into alignment with current state requirements. Once complete, all run-off from the open barnyard will flow into the manure pond.

It is also worth remarking on what was not happening on Jon’s farm at the time of our visit.

“We were able to put in a satellite manure pond this year,” notes Jon. “Normally, this week, the week of the 15th [when Vermont’s manure spreading ban goes into effect], we would be trying to get all of our ponds empty. We don’t have to do that anymore because we have plenty of storage.”

This means that Jon was able to spread his manure when the ground was dry, rather than wet or frozen–a practice that is not allowed by Vermont’s required agricultural practices.

Spring feels far away right now, but Jon hopes to incorporate manure injection and draglining into his practices next year when the manure spreading ban is lifted.

Jon’s investment in infrastructure improvements will do a lot to protect water quality and support soil health, but his steady, persistent efforts on a seasonal basis will, too.

Chief among those is no-till corn planting.

Jon started the practice when his farm was located in Starksboro. Initially, he no-tilled into sod after first cut. Within 2-3 years, he was planting 100% of his corn with no-till.

Moving the farm from Starksboro to Orwell was a game changer.

When he first moved, Jon anticipated that he would have to plow everything in the fall, till in the spring, grow corn for two years, and then rotate back into grass.

But it just so happens that the Audets had planted cover crops in the fall before. In turn, Jon did a mix of conventionally planted corn and no-till into cover crops.

“Once I got to learn the soil better, I did everything no-till,” Jon says.

And he skipped rotating back into grass every two years.

“I have some land that’s in its fourth and fifth years of corn, and we have just as good of a crop,” he explains, adding, “Every two years of crop rotation is expensive. Being able to grow corn on the same ground just makes sense.”

In this way, it’s just Jon in his corn planter. He doesn’t have harrows and plows running, and it doesn’t take multiple people to complete the task at hand.

Like most farmers, Jon is the kind of person who does what it takes to get the job done, with a fair amount of experimenting and tweaking to overcome the obstacles in his path.

“When you’re trying to work in the field, weather dictates what direction you’re going to go,” he says. “If the soil’s too wet, you can’t plant. If it’s too dry, nothing wants to grow. It’s about learning how to work with your soils, learning when it’s time to go, and when it’s not time to go.”

Next are the up-front equipment costs. Jon purchased his no-till corn planter out of pocket before grant money became available. He has since invested additional money in the planter, changing around row cleaners and different closing wheels.

Still, Jon acknowledges that “compared to what it costs to keep extra harrows and tractors we’re not using maintained, it more than covers itself.”

At the same time, if grant funding had not been available to support the purchase of his no-till drill, it likely would not have been a priority.

Perhaps the biggest hurdle Jon has experienced when it comes to addressing water quality is investing in infrastructure improvements, which come with significant price tags. It’s difficult to obtain loans for such projects. He has benefited from the support of the Natural Resources Conservation Service (NRCS) and Vermont’s Farmstead Best Management Practices (BMP) Program, which provides engineering services on a priority basis for the design of BMPs at no cost to the farmer and can cost share on the construction of eligible practices.

In addition to grant funding, Jon has also benefited from learning from other farmers and agriculture professionals. Especially before the pandemic, there were a lot of in-person educational opportunities, like the No-Till Conference, field visits, and 1:1 support from UVM Extension.

“It’s hard for farmers to adapt until they see someone else doing it,” Jon says.

That is precisely why Jon appreciates being a member of the Champlain Valley Farmer Coalition. He initially became involved back in 2012 when Vermont’s Required Agricultural Practices took effect and many farmers felt unsure of how to proceed. These farmers united to offer mentoring and peer support in finding a path forward.

Despite the obstacles and near constant trial-and-error, it is well worth it to Jon to be a good steward of the environment in his work as a farmer.

“We have a responsibility to the environment and the waterways. Nobody wants to pollute,” says Jon. “My kids and I enjoy Lake Champlain–we do a lot of swimming, fishing, and recreation. We want to do the kind of work that we can be proud of.”