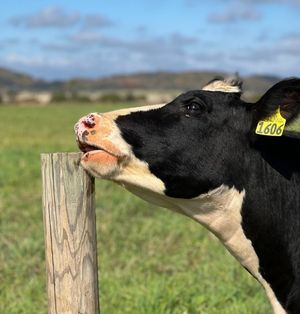 “There’s no doubt in my mind that heifers on pasture are healthier,” says Paul Knox, owner of Knoxland Farm in Bradford, Vt.

If you didn’t know Paul, you might assume that he is an organic farmer tending a small herd.

To the contrary: Paul is a conventional dairyman of a large farming operation (LFO) with a herd of 1,300 cows.

“There’s a conception, perhaps a misconception, that organic [farming] is about grazing and conventional [farming] is not,” remarks Kirsten Workman, UVM Extension Agronomist and board member of the Champlain Valley Farmer Coalition. “But any farmer will agree these are healthy heifers and the forage is high quality.”

She says this while standing in a field belonging to custom grazers Marc and Cheryl Cesario, owners of Meeting Place Pastures in Cornwall, Vt. The lush green landscape is dotted with Paul’s holstein heifers, some with their heads down munching on grass, others snoozing in the sun on a bright October afternoon. Three calves born just that morning are nestled amongst the taller grasses.

Marc and Cheryl are first generation farmers and have been custom grazing beef cows and dairy heifers from other farms since 2011 on land parcels throughout Cornwall. They recently added their own flock of 400 ewes, who can often be found grazing at various solar panel sites in Addison County.

Marc and Cheryl got into the business of custom grazing after spending an intense two years direct marketing beef, pork, and chicken. Once they welcomed their daughter, they quickly realized that caring for a baby while selling at farmers’ markets is a difficult juggling act, literally and figuratively. They needed to shift to a business model that would allow them to focus on a couple of things that they could do very well.

They were presented with the opportunity to acquire land in Cornwall. Because the area’s hilly topography does not lend itself to dairy expansion, custom grazing seemed like the best way to use this opportunity and not overextend themselves financially.

The Cesarios have spent the past decade honing the complex logistics of their operation and building their “street cred,” as Marc describes it. Theirs is a business built on relationships and trust. As first generation farmers, they have worked hard to establish their reputation in the agriculture community as knowledgeable and skilled custom grazers who are deeply invested in the success of their clients and their animals.

It was that knowledge and commitment that led Paul and his heifers to Meeting Place Pastures this past May. He has perennially pastured his heifers at various locations: on discontinued dairies whose owners love the sight of cows in their pastures and on parcels of his own farm where manure spreading is not allowed due to their proximity to waterways.

Having been inspired to start grazing his heifers following a trip to New Zealand, Paul’s  impetus for grazing was twofold: financial health and cow health.

From a financial perspective, farmers are often faced with increasing revenues or decreasing their expenses. With grazing, Paul opted for the latter. Grazing means that he can decrease his feed and facility costs. He does not have to spread as much manure, plant and chop as much corn, or engage in the laborious process of storing it.

From a herd health perspective, Paul observes that grazed heifers are leaner with stronger frames and less edema. They are more physically fit for calving and have larger birth canals. They are less prone to necrotic dermatitis, also known as udder rot. The calves themselves tend not to be oversized and are less prone to ketosis, a metabolic disorder.

Are there management challenges with grazing dairy heifers? Absolutely. “I’m learning as I go,” says Paul. “It’s exciting and fun, but can be frustrating.”

Common issues Paul has encountered include fly-induced mastitis; pink eye when weather conditions are dusty; foot rot and cellulitis when the ground is persistently wet; and skin sensitivity to the sun. He also must take care to ensure the heifers have plenty of shade, adequate salt intake, and clean water to drink. Paul has dealt with the occasional freak accident as well, like heifers getting stuck in a tree, being spooked by unusual loud noises, or encountering porcupines.

Overall, Paul has observed that his heifers on pasture are not any more accident or disease prone than cows in a barn.

For their part, Marc and Cheryl have found that it takes some time for livestock new to the pasture to get accustomed to fencing. It can take up to five days for them to transition from the barn, while they learn not to hang out at the fence line and that grass is, in fact, delicious. Marc and Cheryl keep their pastures well vegetated so that livestock are not wandering around looking for food. Because cows can physiologically only take so many bites in one day, the Cesarios want to ensure that each bite is hefty and nutritious. Marc’s mantra is, “Move the cattle to the feed, not the feed to the cattle.”

Of course, that is sometimes easier said than done. Nutritionist Bill Kipp, President of Independent Dairy Consultants, works primarily with organic dairies and has observed a common challenge among his clients: needing to supplement grazing cows with grain in July and August. Those months feature high heat, high humidity, and long days.

He has been working with his clients to figure out how to manage the heat. Some have been pulling the bulls from their herds in October and November to ensure the cows do not freshen in the late summer months. He has also noticed that farms at higher elevations tend not to experience these issues.

Still, Bill is a strong advocate for grazing. “You can’t produce yourself out of financial trouble. With all of these benefits, why wouldn’t a farmer want to do this?”