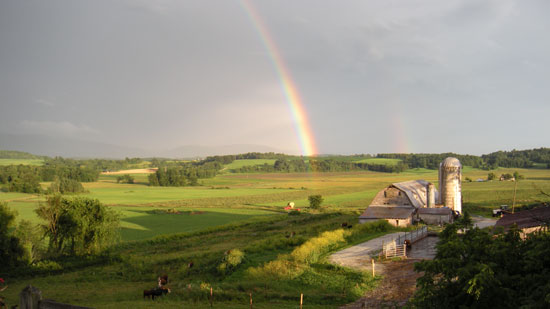 Smith Family Farm in New Haven, VT has been a member of the Champlain Valley Farmer Coalition since the organization’s founding in 2012.

A stack of papers held together by a simple black clip rests on a wooden desk. A silver pen is arranged on top just so. The edges of this vignette are rather blurry–as if in a dream–but the center is in sharp relief. We can see big, bold letters announcing: LIMITED LIABILITY COMPANY OPERATING AGREEMENT OF SMITH FAMILY FARM LLC.

What would it be like to go back to that day in 1972 when Harvey Smith and his wife Donna had, at long last, built enough equity to buy their own dairy farm?

Would we tell them of what is to come? The struggles and triumphs? The experiments and innovations?

Would we tell them that all of this is meant to last at least another 50 years, so that one day the next generation could take up the mantle?

This is not a dream. Those papers are dated January 1, 2021. This is a photo from the Smith Family Farm Instagram feed.

And AnnaJo Smith, granddaughter of Harvey and Donna, has just declared, “I am excited to officially join the family business and carry on the legacy my grandparents have built here on our farm.”

The Smith Family Farm sits atop 295 acres of land where Little Otter Creek meets up with a smaller creek from New Haven Junction. Until 2006, they were a dairy operation but then slowly transitioned to livestock for meat production. At the time of our visit in February 2021, they are raising 60 beef cows and 30 pigs. As we head into spring and the temperatures warm, Harvey and AnnaJo will also raise a flock of meat chickens. Their beef, pork, and poultry is sold to customers all over the Northeast, including at AnnaJo’s market in New Haven, the Vermont Food Collaborative (more on that venture later).

In the meanwhile, winter is their downtime, as their animals are not on the pasture. This allows Harvey and AnnaJo to focus on their current side-project: investigating permanent fences for rotational grazing.

Although AnnaJo is indeed Harvey’s granddaughter, he often refers to her instead as his partner. It’s easy to see why. They share in the duties of operating the farm, including caring for the animals. Harvey is passing along his knowledge of raking hay and doing the field work. That’s easier said than done, he acknowledges. “It’s a little more difficult when we need to be in the tractor together. There just isn’t enough room for the both of us!”

The Smith Family Farm was an “early adopter” of membership in the Champlain Valley Farmer Coalition, though their efforts to protect water quality and soil health goes back decades.

It all started in the late 70’s and early 80’s, when Harvey collaborated with UVM Extension’s Jeff Carter, a founding member of CVFC, on cover crop trials. Atrazine was the herbicide available at the time, so they were limited in the variety of crops they could use. In turn, they tried cover cropping without using herbicide, but, according to Harvey, that experiment was a “disaster.” They could not keep up with the weed infestation, even though they were cultivating 2-3 times per year. Nonetheless, Harvey and Jeff had some successful trials with cover cropping, which has since become a common practice on farms.

The Smiths later had their land surveyed to determine their soil losses. Based on the results of that survey, Harvey says, “We made smaller strips of our land on the hillside. We had permanent vegetation on all of that land, although we could rotate it into crops if we wanted to.”

Fifteen years ago, the Smith Family Farm signed up for the Conservation Reserve Program for a contract that expires this year, which they intend to renew. This resulted in a double-sided riparian buffer on both sides of the creek that runs through their farm. (The local beaver population has greatly appreciated the initiative, having now whittled the trees into shrubs.)

And finally, all of their barnyards, driveways, and roofs are setup to divert rainwater to a manure storage area.

When it comes to water quality and soil health projects, what does the future hold? It depends primarily on what research and innovations come along. They have done all that they can as a small farm operation. “Unless we expand,” Harvey says, “I can’t imagine there’d be another large project.”

For all of their success in environmental stewardship, the road has not been easy. As a small farm, they have not often been on the priority list for project funding. Technical support has not always been readily available. They were among the first farms in Vermont to implement rotational grazing in the mid-1980’s, which meant traveling far afield to learn best practices.

When asked why it’s important to him as a farmer to be a good steward of the environment, Harvey recounts his childhood. “The stewardship ethic was bred into me,” he said. “My grandfather and my dad were always pretty adamant that we needed to leave the land in better condition than when we received it. That set the precedent for me to follow in this tradition.”

He went on to say, “We know the impacts on the environment from agriculture and we’ve come up with creative solutions to address them. Before, a lot of those weren’t there. That change started to take place in the mid-to-late 80’s. Even though we were hesitant to take them, and started kickin’ and screamin’, in hindsight, those were really good initiatives and we’ve been making progress ever since.”

Harvey is also a legislator, serving in the Vermont House, representing Bridport, New Haven, and Weybridge. This ensures that Harvey can influence the trajectory. He credits CVFC for creating some space for farmers to collaborate and support one another through the changing regulatory and technological landscape.

“I knew from my other life in the legislature that finding solutions for water quality issues associated with agriculture was critically important,” he says. “None of us could do it by ourselves; we had to do it as a group. We had to get support behind us. Land grant colleges needed to get on board, too. We had to be very creative in finding solutions. Individually, we might be able to adapt to some of those changes, but it’s much easier as a group.”

That’s a statement AnnaJo can attest to. A little more than a year ago, she teamed up with Jennifer Kennett of Tail Feather Farm to start the Vermont Food Collaborative, their answer to Addison County’s lack of direct-to-consumer markets (apart from the bi-weekly Farmer’s Market).

AnnaJo and Jennifer’s goal is to ensure that the farmer is not left out of the system. Each producer sets the price of their goods and pays a small percentage to the collaborative to cover overhead costs.

AnnaJo and Jennifer can be the face of each farm for the consumers. AnnaJo explains, “Consumers understand that they can have a relationship with the producer. We can educate them about farm practices, and differences among the farms. We try to make it a personal time for customers to shop.”

We asked AnnaJo about her description of the Vermont Collaborative as a “farmHer owned and operated market” and if it holds any special significance to her to be a woman in agriculture.

“You don’t always find women supporting women in the best ways. We want to empower any young member of our community, but especially women. ‘Take a chance. Go for it. Stick together. Find your people.”

The Smith Family Farm legacy of collaboration, innovation, and stewardship is in great hands. Here’s to the next 50 years!

Learn more about the Smith Family Farm by visiting them on the web and following them on Instagram @smithfamilyfarmvt.