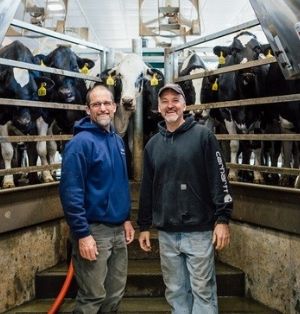 Kayhart Brothers Dairy, LLC in West Addison, VT has been a member of the Champlain Valley Farmer Coalition since the organization’s founding in 2012. Tim Kayhart has served on the Board of Directors since 2013, and was recently elected to another 3-year term.

How many of us can say the same after nearly 30 years of hard work sandwiched between early mornings and late nights?

He’s one of the brothers in Kayhart Brothers Dairy. Since the early 90’s, he has farmed alongside his brother Steve on their 1200-head/2500-acre dairy farm in West Addison.

Their parents had moved to the location and set up shop back in 1979. They farmed alone until Steve returned in 1990; Tim followed in 1994. They operated as a four-way partnership for 20 years until the brothers took over completely in 2010.

Tim shares, “I’m extremely blessed to have the family that I have, to be in partnership with my brother. We’re each pulling the same weight every day. I’m grateful for our parents for passing on the commitment to dairy, the commitment to family. There’s a lot of pride that goes into it. It’s what we stand on.”

It’s now January 2021, in the midst of a week filled with intermittent snow squalls and plummeting temperatures. The world feels dormant, but the Kayhart Brothers are as busy as ever: they’re pouring bunker walls and completing barn renovations.

Though the renewal of spring is months away, crops and vegetation are top of mind today.

Tim, who oversees crops and equipment, employs a wide variety of agricultural practices meant to protect water quality and support soil health. Manure injection, no-till corn planting, no-till cover crops, and riparian buffers top the list. Tim hopes to purchase his own no-till drill soon so he can do more of his own seedings for crop rotations.

It all started around the turn of the century when the Kayhart Brothers were embarking on the large farm operation (LFO) permitting process. Recognizing that their farm is surrounded on three sides by water and wanting to be a positive representation of the dairy industry, they took steps to adopt more sustainable practices on their farm.

For Tim and his brother, the greatest barriers on their ongoing journey have been changing weather patterns and adverse weather events. When their heavy clay soil is too wet, they are unable to plant; when precipitation is inadequate, seeds will not make good contact with the soil and germinate. That has been happening more and more lately. But it speaks to the necessity of the steps they are taking: preventing a changing climate while the climate is changing.

At the same time, there are a number of factors that have contributed to the Kayharts’ success in adopting new practices.

For one, Tim points to other farmers in the community, connections he has made, in part, through the Champlain Valley Farmer Coalition.

“They’re not afraid to spread their knowledge–what’s worked, what didn’t work,” Tim says.

He also recognizes a changing mindset of the current generation of farmers, who are moving away from the “work the land, plow everything” approach of yesteryear. Now, it’s about “taking risks, and bit-by-bit it gets easier.”

For another, Tim acknowledges the advances in agricultural technology. Techniques that were impossible 15, 10, or even 5 years ago are now possible thanks to creativity and innovation in the field.

Tim’s advice to other farmers who might be wondering where to start?

When asked why he remains deeply involved in the work of the Champlain Valley Farmer Coalition after all these years, Tim’s commitment to his family and the agriculture community shines through again.

“I feel a duty to both my family and other farmers to be an advocate for what we’re doing.”